Skip to content
You are here:Home-News by Brand-Ford-Would Ford by Lucid Motors?

Would Ford by Lucid Motors?

Chinese-backed, California-based startup Lucid Motors promises a lot, but it needs a lot of money to get its first vehicle, the Air sedan, into production. Bloomberg says that Lucid will raise more money with the help of Morgan Stanley, and that it’s held takeover talks with Ford executives.

Ford isn’t looking to purchase Lucid now, but it hasn’t planned a future deal. Hackett is currently undertaking a 100-day plan to review Ford’s business, looking for new revenue opportunities and trying to increase efficiency in the automaker’s operations. 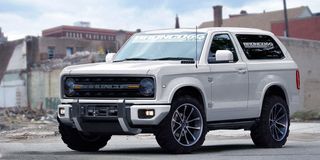 Lucid intends to build the Air sedan at a new factory in Arizona, but Bloomberg previously reported that it would only break ground once its funding was secured. At this year’s New York Auto Show in April, Lucid’s chief technology officer Peter Rawlinson said the automaker hopes to debut the production-spec Air in 2019.

“We don’t have the money in place. That’s why we need to secure Series D
[funding] in order to execute this,” Rawlinson told Bloomberg in April.

“It would be irresponsible to start moving earth or start anything until we have a financial runway to execute that professionally and with absolute integrity.”

Lucid just presented video of a prototype Air sedan going up to 235 mph in testing. Rawlinson promised that the Air would offer Maybach-level luxury with Bugatti-esque performance in its highest-spec trim.

Ford’s takeover could help with Lucid’s aim of getting the Air to market, while helping Ford with its ambitious electrification aims. Still, Lucid could make enough funding on its own if they impress investors with something that they’ve never seen so far.

However, the startup needs a lot of money to get its goals. Making vehicles is expensive.